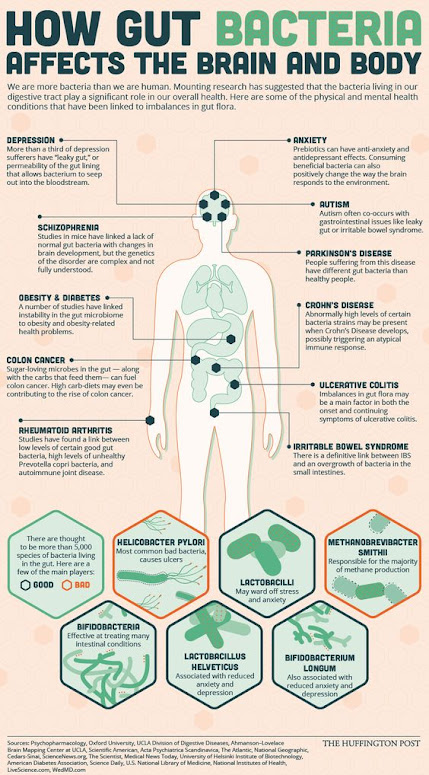 Posted by Grammy B – Advances in Medicine and Biology – #Probiotics #GutBacteria

You’ve probably heard that microbe populations living in and on our bodies outnumber our human cells 10:1.  While this ratio is in dispute (some researchers suggest that its more like 1.3:1, the fact remains that the average human hosts about 100 trillion microbes and, even with the more conservative estimate, outnumber human cells.

The human microbiome are the bacteria, viruses and fungi that live everywhere in the body, including on the skin, and inside the mouth and nose.

The microbes living in the intestines (i.e., the gut) and their role in human health, illness and chronic disease have been the subject of many recent and ongoing scientific research.

Based on the findings, it is now widely thought and accepted by leading experts in the health professions that an imbalance in the gut microbiome can lead or contribute to many different health conditions, illnesses and diseases (as illustrated in this Infographic) including anxiety, autism, depression, Crohn’s Disease, Parkinson’s Disease, schizophrenia, rheumatoid arthritis, ulcertative colitis, Irritable Bowel Syndrome (IBS), obesity, diabetes and certain cancers.

An “imbalance” that is linked to adverse health consequences usually means an overgrowth of “bad” bacteria like H Pylori, or yeast, like Candida Albicans.

This infographic illustrates just a few of the “good” and “bad” bacteria that are known to live in the human intestine.